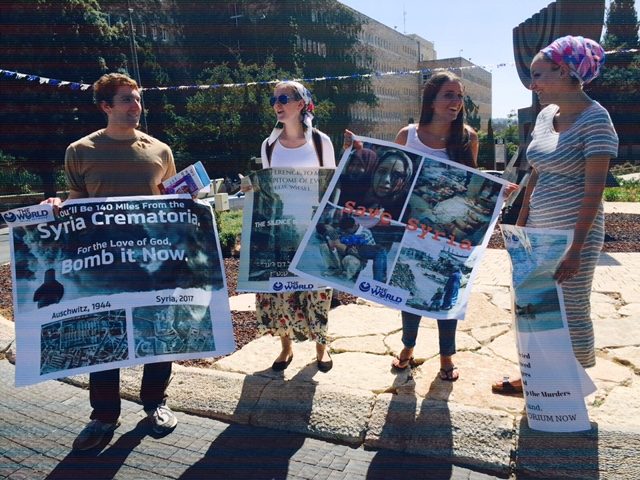 Just days ago, right outside the Israeli Knesset in Jerusalem, there was a protest calling on Israel to ‘Save Syria’. Holding a number of signs, a small yet powerful group sponsored by The World Values Network stood for hours in the scorching sun pressuring Israel to take action against the Syrian crematorium, just 140 miles from its capital. Hundreds of people entering and exiting the Knesset observed the signs, inquired about the protest, and gave their ‘thumbs up’ in approval.

The protest was organized to break the deafening silence of the world as hundreds of thousands of innocent Syrian men, women and children are murdered with chemical gas at the hands of Bashar Al-Assad and to remind the world that there is an operating crematorium in Syria burning the bodies of Assad’s prisoners. Just seventy years ago, the Jewish people experienced a genocide. Of the six million martyrs, 1.1 million were consumed by the gas chambers and operating Crematoria of Auschwitz I and Auschwitz II- Birkenau between the years 1941 and 1944. While this all occurred, the world remained silent.

Though nothing can ever be compared to the Holocaust, doesn’t mean that nothing can be learned from it. The Syrian Crematorium got one single day of media coverage. How? It’s an operating crematorium!

According to the Human Rights Watch, for six years now, the Civil War in Syria has affected an estimated 13.3 million people. Under Bashar Al Assad and his cruel leadership, there has been a displacement of 11 million people, 3 million refugees, and close to 500,000 casualties. The number of children murdered are now estimated to be more than 55,000; another approximately 24,000 are claimed to be women.

The protest demanded that the one Jewish state take leadership in destroying the operating crematorium in Syria. It would take just about one airstrike for Israel to have that accomplished. Israel, whose people experienced a genocide less than a century ago, has an obligation to obliterate Bashar Al-Assad’s crematorium. Never again, must mean, never again.

Israel is also the only democracy in the Middle East, a beacon of hope and freedom that is built on the belief that all men are created equal in the image of G-d. When Arab children are being gassed less than a three hour drive from Jerusalem, Israel must remain committed to its values and exercise power to dismantle the crematorium. How can the Jewish nation, who gifted the world with the Ten Commandments, one of which is, “Do not murder,” not react or respond, instantly?

Another poster quoted famous Holocaust Survivor, Elie Wiesel, who carried the memory of the martyred six million of the Holocaust . “Indifference to me is the epitome of evil.” The goal of the protest was not only to galvanize members of the Israeli Knesset to take action against the Syrian crematorium, but to make noise. The protesters gathered together to destroy any notion that humanity does not care for the lives of Arabs in Syria; it was there to arouse those who sleep through this tragic time, to give one darn. Because, as Elie Wiesel always taught, there is only one thing worse than the inability to take action: to remain indifferent.

During the demonstration, a Jewish man walked by and said he was from Aleppo. He had tears in his eyes as he observed the graphic images of a broken, devastated Syria depicted on the posters. He photographed the protesters and thanked them for doing something for the endangered people of Syria and for reaffirming that he is never alone; his pain and frustration is understood.

In this week’s Torah reading, Parshat Shelach, Moses sends a group of twelve spies to scout out the holy land of Israel. They were tasked to find the most strategic route for a Jewish invasion to conquer the land. Instead, they returned devastated and brought a wall of fear that crushed the eagerness to enter the land that once overwhelmed the Jewish people. But it wasn’t the giants they feared or the the fortified, towering cities they dreaded, but rather, the broken world they discovered. The spies saw a damaged land and didn’t want to bear any responsibility in fixing it. They were in the desert, living the most G-dly life, dedicated entirely to Him. Why should they compromise on holy time with G-d to get involved in some sort of healing project?

But, the spies were wrong; the way they saw the world was not the way G-d envisioned it. G-d wanted them to bring healing to the evil that was consuming the land of Israel at that time. The spies misunderstood G-d’s ultimate plan: channel the blessing and experience of G-d from the desert into the World and improve it.

Ultimately, ten of the twelve spies failed their mission. Although they had good intentions in desiring a more constant relationship with G-d without a single disruption, they were willing to neglect the suffering of G-d’s children in other parts of the world. We cannot afford to make the same mistake as the spies. If we are living in a time when evil is present, we have the obligation to stop it. We can try our very best to put an end to a functioning crematorium in Syria. The questions is, are we willing to?

As for the crematorium, Prime Minister Netanyahu, for the love of G-d, bomb it now!

A week before the protest, Rabbi Shmuley Boteach, founder of the World Values Network, went to the Knesset and discussed with government ministers and members of Israeli Parliament the need for Israel to take action against the Syrian crematorium.

The Protest to ‘Save Syria’ is only the beginning of a series of more demonstrations, ad campaigns, articles, and events that will highlight the need to end genocide occurring around the globe, all of which will be operating from anti-genocide centers run by The World Values Network which are planned for New York City, Jerusalem, and even Kigali. 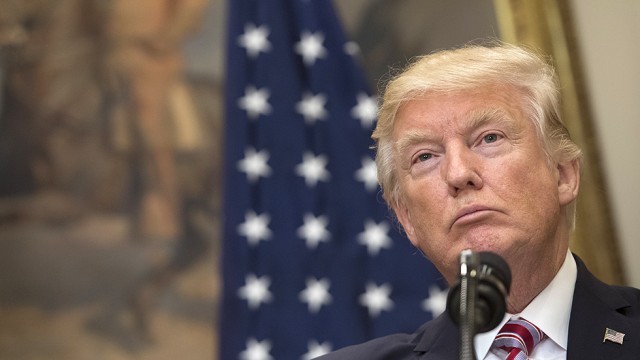